Skip to content
The word ‘dynamic’ is a good one for music.  We take our musical dynamics rather for granted —  piano, forte, crescendo and diminuendo — as indicators of volume. But they’re much more than that, as the word itself can remind us: thermodynamics, dynamo, dynamite, dynasty.  It is a word for motion, power, and change — the opposite of static — and it has a long history.  Music benefits from a deep understanding of the meaning of ‘dynamic’.  Forte is about force and purpose, not just loudness. It’s about mass, acceleration, and direction.  It can be Sturm (storm, wind); it can be Drang (stress, pressure, impulse) — and sometimes it’s just loud.  Piano is about dolce (sweet) as much as it is about lontano (distant). Dynamics define and alter the physical and emotional motions of music.  In a way, it’s all dynamics, everything that’s written, even the notes.
On page 16 of the score of Robert Schumann’s Piano Trio No. 3, the symbol f appears 46 times in twelve bars. This doesn’t mean that the music is incredibly loud; it means something seeks reinforcement, something is struggling to find a way out, something is in desperate motion. Combine these with the other elements on the page, and the more general dynamics will come roaring forth, doubled and redoubled. In Schumann, such turbulence is everywhere, and relief is all the sweeter for being precarious and often fleeting. 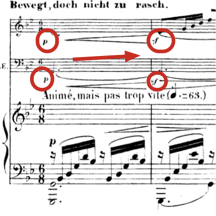 Just to set our ears on their way, we can take a look at the opening bar. Even those who don’t read music can begin to see the instant roar of motion. The page itself becomes dynamic (bewegt).  The question ‘what does it mean?’ becomes indistinguishable from the question ‘how does it move?’  A page like this leaps off the page. Amidst all this motion, one may come to feel, as they say, moved (bewegt).
And perhaps a bit of notice about the word ‘Romantic’ is in order, just to round things off… also an old word, derived from the telling of stories (roman).  Such stories would just be stories, unless they leapt from the page or from memory somehow, illuminating themselves, and releasing energy.