Since Glenn Gould’s unbelievable 1955 recording of JOHANN SEBASTIAN BACH’s Goldberg Variations, they haven’t needed much in the way of introduction; they are now as familiar as any work in the whole of the classical repertoire. For the purpose of making them strange again, it is worth noting that, strictly speaking, the Goldberg Variations are neither ‘Goldberg’ nor ‘Variations’ – but those are stories for other spaces, historically and technically useful but maybe not so informative for listening. The part about Goldberg is in fact rather random. 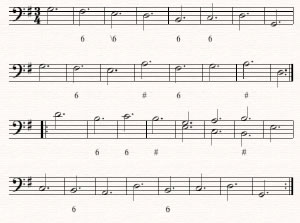 Insofar as the term ‘Variations’ is accurate (and sensible if not always audible), it reflects that each of the 32 32-bar movements of the Goldberg Variations is built around the same bass line (fig. A, below). So there is no ‘theme’ at the opening (as might be expected from a piece titled ‘Variations’); there is instead an ‘Aria’, which decorates the core bass line most simply, and which reappears whole to end the work, as though closing a book. Right at the middle, curiously, is the ‘Overture’.

Between these bookend-Arias is a fantastically complex and whimsical system of pieces over the bass. Innumerable systems can be traced, calculated, counted, and quite possibly heard in these thirty pieces between the two Arias. These systems and patterns often show up as sets, groups, and powers of two and three, though it can be difficult to discern which have audible or even mathematical meanings. Of these many systems, however, it is absolutely useful to know that the thirty works between the Aria(s) come in recurring sets of three, as follows:

Of course, it doesn’t exactly work this way. For example, in the first group of three (movements 2-4), the genre and hand-crossing pieces are reversed (probably because

the whole of the piece had not been completely conceived at this point) – obviously, the computer-program scheme is awfully reductive. But given how the canons develop, it is useful, broadly, to view the Variations in this way, because of the way the pattern builds and then breaks. For the duration of the piece, one has heard canons matching their place with their intervals (as in ex. b and c, below), but where there should be a canon at the tenth, the piece bursts out of its own

rigor into ‘quodlibet’ (‘what you will’) – a sort of post-systematic double-canon using songs whose lyrics are as follows: “I have been so long away from you,” (ex. d) and “cabbage and beets have kept me away.” (ex. e) The system doesn’t break, exactly, it just outdoes itself, then disappears back into its Aria.

Finally, for this performance, there is the matter of playing the Goldberg Variations with a string trio, For whereas it must be admitted that there is great uncertainty about which instrument, exactly, Bach wrote them for, it can be said with absolute confidence that the Goldberg Variations are works for keyboard (ClavierÅ¸bung), and were absolutely not for string trio. The best explanation may simply be that it is possible to do, and furthermore enjoyable to do. Dmitri Sitkovetsky’s arrangement can be considered a sort of period arrangement, reflecting the tastes of a period beginning in 1955, when performers and audiences alike developed a liking for playing and hearing the Goldberg Variations often, because of the great recordings of Glenn Gould, to whom Sitkovetsky’s arrangement is dedicated. The meaning of the arrangement for string trio is simply another part of the inexplicable musical history of Bach – always tied in beautiful knots, to be taken for what you will.