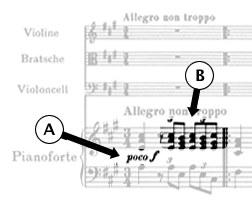 Rather than talk about biography, which could be rather dry, or sketching out an analysis, which might be rather drier (to read, anyway), it might be interesting to speak about a few details in the A Major Piano Quartet that can open onto broader thoughts about the music of Johannes Brahms. In particular, there are a couple items just at the outset with enough potential energy to assure that when things move, they will really move.  The first item is the dynamic marking: poco forte (A). This is a queer cocktail of a dynamic. It seems laced with oxymoron, Italian-as-a-professional-language, and even perhaps a bit of mixed metaphor. Above all, it contains a troublesome and misleading intimation of ‘littleness’.  (Curiously, Brahms was once complemented publicly by King George of Hannover as being a ‘little Beethoven’, and there is something rather poco forte about that…) But this is also the dynamic marking of the last movement of the Brahms’ first symphony – ‘poco’ is clearly not the controlling idea here. There is in any case nothing little about the opening of the piano quartet. So what is this poco forte? How might it be read, played, and given?

The other fruitful detail, also from the first bar, is the simple note-oscillation (B). It’s a tiny bit of music, but full of possibility, instability, and potential for melodic, harmonic, and contrapuntal development. It’s a little thing, this melodic/harmonic wobble, but it will reappear significantly and memorably in every movement. (Brahms often took such minute musical details and built enormous pieces by mining their musical potential.) Taken together, the elements of poco forte and slight oscillation show a powerful desire to grow outward from unity, to unwind potential, and to let music grow as though from an unbroken, or just-broken, seed.  The poco forte contains intimations of forte and fortissimo to come, as well as indicating restraint before their occurrence. And the oscillating small intervals show a strong desire for motion from stable (in the singleness of the first beat of the first bar), to unstable (seeking, and not getting, resolution the second bar). There ends up being something very simply declarative in all of it.  But the content of what it declares (‘in the character of forte but with the sound of piano’, as Brahms is reputed to have said), contains the seed of a grand construction – and with that sort of content lying behind it, to make an opening statement ‘a little strong’ is plenty strong enough.