It is no secret to musicologists by now that JOHANNES BRAHMS coded a valediction in the first movement to Agathe Siebold, whom he ought to have married, but, clumsily – and painfully for both of them – did not. Clearly, he did not take the end of the affair lightly: the G major Sextet was only begun five years later (in 1864). So, in the first movement, we can find the following musical cipher, which reads ‘Agathe ade’ (figure 2) 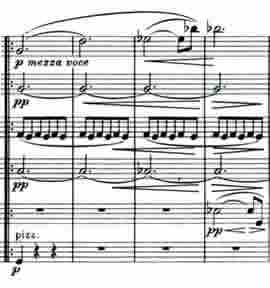 Much of what’s musically crucial in the rest of the piece can be found in this small phrase. First, there is the stepwise motion of A-G-A and D-E, and second, there are the falling fifths, A-D and H-E. Both of these elements can be found throughout the piece, beginning with its first bars. 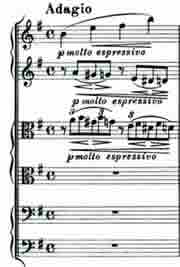 A relationship to the ‘A-G-A-D-E A-D-E’ idea can also be found explicitly in the opening of the third movement, in which moving fifths become rising fourths (a sort of double inversion); the second violin plays a line which falls like the D-C# at the end of the cipher; and the viola oscillates like the A-G-A.

That all said, there’s not exactly a program to the work. One can’t say at any point ‘This is the part where he drops the ball (a la Berlioz)’ or ‘This is where he picks himself up by the bootstraps and gets back on his feet.’ In fact, Agathe’s place in his life has more to do with her growing absence from the piece than with her initial coded presence. The relationship of Brahms to notes becomes more important than the relationship of Brahms to Agathe, and in the end the relationships of notes 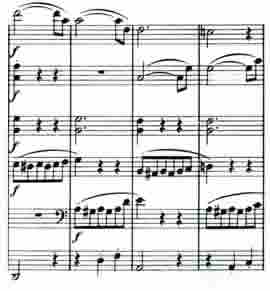 to notes become paramount. A brief look at the score will tell some of the story of how the themes oscillate, equivocate, and jump from part to part. And amidst the many possible patterns of six parallel parts, Agathe and her cipher fade quickly into the texture.