With the Eroica Symphony, there inevitably comes the matter of Napoleon. According to Ferdinand Ries, student of Beethoven and arranger of today’s version of Eroica: Beethoven, enraged upon hearing of Napoleon’s taking the title of ‘Emporor’, scratches out his dedication to Buonaparte from the title page of the manuscript of his third symphony, and calls the great Frenchman a ‘rascal’. Over 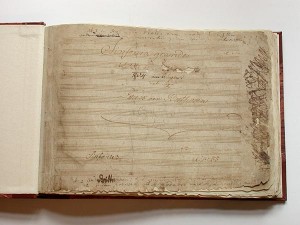 and over the story has been told. Sentimental sympathy with the democratic political leanings of the great Beethoven naturally ensues.

It is indeed true that the dedication is scratched out — it has been scratched out hard enough that there is a hole in the paper. This is clear to see. But the how and why of it all is a matter of hearsay, and even if Ries’ account is taken word-for-word, his anecdote doesn’t explain so much about the symphony itself.  It doesn’t explain why this work is so much longer than anything before it, or elucidate the source of its drive, or its variation-writing, or even its funeral march (which certainly can have military-heroic connotations). The hole in the title page of Eroica does say something about Beethoven, though: his manuscripts are a mess.

Before computers, there were ‘copyists’. A copyist would have to be in command of a large amount of musical information simply to transform a manuscript into something the outside world, including  performers and publishers, could read. This was an extremely important role, even into the later 20th century (Wikipedia dates the usefulness of copyists as lasting until the 1990’s). Beethoven needed good copyists, because his manuscripts are difficult. In retrospect, he must have had reasonably good ones, but he seems to 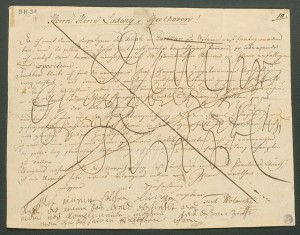 have treated them rather badly. Below, for example, is a letter from one of his copyists, who (quite politely, if a bit indignantly) is resigning his duties. Beethoven has scratched it all out and written in large letters on top of it: ‘Stupid, conceited, asinine churl’. He has also written rather more on the back of the page. Which is to say, his reaction to this copyist’s resignation was similar to his reaction to Napoleon’s coronation, and the result was similarly messy on the page.

A second step toward getting symphonies into the public ear was to have them reduced for private consumption through arrangements. This was also a demanding task, requiring trained ears and some compositional ingenuity. There are piano four-hand arrangements of the Eroica Symphony from Czerny and Schubert; a piano solo arrangement from Liszt; a flute, violin, cello, and piano arrangement from Hummel; and this one for piano quartet from Ferdinand Ries. (This is not an exhaustive list. There are many others.) An arrangement of this kind was not just a republication, it was a way for the arranger to study works of masters, a kind of copying which brought serious familiarity with masterworks. And furthermore, as a result of these studies, great symphonies could be played and studied at home, as chamber music. Copying and arranging brought a sequence of rereading and rewriting which computers and recordings have made to seem… redundant. But they had more than repetitive purposes.

Ferdinand Ries was in fact a close associate of Beethoven, and he was around for its premiere at the Theater an der Wien in 1805. He famously misconstrued the ‘wrong’ horn entrance at the almost-recapitulation in the first movement as a wrong entrance by the horn player, and told Beethoven how terrible it sounded. ‘Beethoven did not forgive me for a long time’. Ries was a fine composer and a reliable source of information about Beethoven. His stories both of the horn entrance and the politics surrounding Napoleon can be well believed. But above all, for today, he can be appreciated for his ingenious re-rendering of Beethoven’s Third Symphony for a small but varied group of four.