After the tonal and formal wanderings of Schubert, and after the further travels of Wagner on the one hand and Brahms on the other, the conventional materials of composition in Austro-German styles had come to seem (for ARNOLD SCHOENBERG, at least) rather old hat. 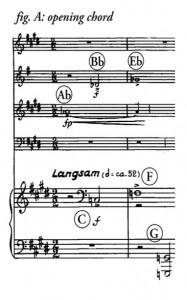 So flexible and commonplace had the techniques become that it seemed possible and necessary to gather them all together, re-combining their forces. In the area of tonality especially, it seemed possible to create changes of tonal center which had the force and flow of melody. Strauss went far down this dangerous path, but many composers were still willing to spend most of their time on the moons of a home key. Schoenberg, more than any other, developed schemes for planet-hopping, to test the air of different harmonic worlds with each passing tone, and set the whole system ablaze.

One of his first complete masterpieces in this explosive new style was the Chamber Symphony, Op. 9.  One can hear, even at its very first moments, a plan and trajectory for what is to come. Schoenberg begins with the chord shown in fig. A, which is a highly un-random selection of sounds (for our ears, not so uncommon since the jazz of the 1960’s, but still tonally adventuresome). Rather than using the major or minor triad as a source for tones, Schoenberg uses the circle of fourths– a harmonic rather than diatonic idea – to find pitches. The listener at first hears this harmonically sweeping selection of sounds resolve itself to a single key. But then, suddenly, these same pitches reappear (raised by a further fourth) now spread into an exuberant cello line (fig. B) – as though the harmonic idea of the initial chord had been kicked sideways and so become melodic. In this way a wildly flexible sense of 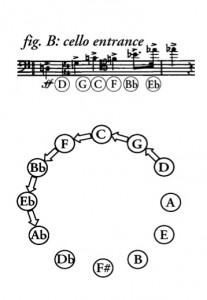 pitch launches the Chamber Symphony, giving vertical and horizontal elements a chance to work in parallel.

Of course that is not all, not even for the first four bars. For the sake of suggestive brevity, it’s best to simply say that one of the key musical issues in the Chamber Symphony is the sheer density of its musical issues. Even with the title ‘Chamber Symphony’, for example, one is confronted with the idea of a symphonic quantity of music given to a roomful of people (a number made even smaller in this quintet arrangement made by Anton Webern). Parallel to the telescoped scale of the group is the musical form of the work: it can be heard both as four symphonic movements or as one sonata-form movement, going simultaneously. The question of whether what was obvious to Schoenberg will be clear to others is not easy: the sonata form, for example, is only self-evident to those who have studied enough music to make it seem so; putting sonata form on top of a symphonic form doesn’t make it any easier to follow. But Schoenberg’s aim was not simply to make a dense whole (though surely there was some recreation to be derived in the assembly and knit- ting-together of so many musical elements); it was also to use all these elements to reinforce one another’s expressive potential. It is this instinct, in the end, which binds the work and makes it one of the masterpieces of the 20th century.