Its many creative uses notwithstanding, the primary function of a computer is to remember; from this arises its ability to repeat itself, and, more importantly, to repeat actions (hence the importance of the Jacquard loom). In electronic music, this regularity is in evidence down to the production of sine waves in fairly pure cycles/second. There are ways of blurring this regularity, as in movies there are ways of integrating digital effects with realistic ones. As digital music develops, so does the capacity to integrate the regularity of the digital with the curves of the real. Max/MSP, in particular, has developed as a tool for real-time performance, allowing for a passage of time which, since it can be led by desire, feels real. 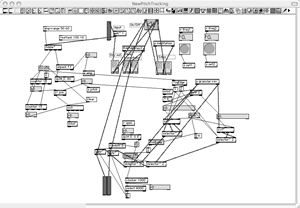 In the case of this patch, developed by Morten Riis at DIEM, the computer responds in some preset and some pseudo-random ways to sonic input from the violin (or whatever sound is being piped in). The performer can control this process to a fairly great, but not complete, extent. What ends up happening is a sort of analog/digital cycle: the performer spurs the computer, which responds, causing the performer to respond, which causes the computer to respond… and so on. Without the solid ground of a performer, it would be either entirely preset or free from identifiable intention (and possibly infinite).

The power of the computer to alter our actions is clearly in evidence, but so are some of its limits. On the one hand, the performer is freed of recording-controlled time. But the computer, though it can create sounds of great complexity, is not the catalyst — not at first, in any case. It may make any permutation of some pre-recorded sound, or any distortion/amplification of a sound from the audio stream; in either of those cases, it dwells in the past. That said, however, it is important to recognize that it does shape what is to come.