For someone as rhythmically experimental as Olivier Messiaen, the canonically classical Wolfgang Amadeus Mozart might seem an odd model for patterns of phrasing. But Messiaen was a great admirer and careful student of Mozart’s works, and was well within his rights to say that he had learned from Mozart’s music how phrases seemed to have no need for regularity – well-formed phrases may have as many bars as they like, and balance (insofar as balance may be desirable) can very well be found by means other than rhythmic. While it is true that Messiaen took these time-lessons to heart in a very idiosyncratic way, it is also true that Mozart’s C Major quintet, K. 515, immediately yields ripe examples of what Messiaen learned. The quintet’s singing lines bring irregular phrases to ebullient fruition with absolute ease. Even in the pristine key of C Major, and in the simplicity of its opening arpeggio, a fluid sense of not-quite-rightness acts as a continual spur, spawning twists of lyricism on its surface and generating operatic turbulence underneath.

One may as well begin at the beginning, which contains the seeds of the next 30 minutes of music, for even within a few introductory bars, there is plenty of crucial musical data, and plenty to wonder at. The five instruments are first divided into three groups, each of which seems to have a different 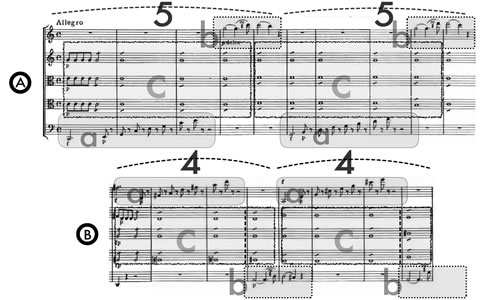 phrase-length in mind (fig. A). The cello plays a three-bar arpeggiated question (marked (a)), which is (partly) answered by a two-bar phrase in the violin (b). Meanwhile, the motoric inner voices (c) change their harmony after the fourth bar, which leaves a pregnant moment in the fifth bar, empty until the cello comes in with another rising question in the sixth bar, and it all starts again. In the comfortably lyric feel Mozart gives to the violin and cello lines, the phrases don’t sound particularly out of whack, but their underlying strangeness is important. Sixty bars or so later, one can feel, in retrospect, how important these shifting structures were and will remain. The opening music reappears in bar 69 (fig. B), with its phrase-lengths ‘corrected’ to four bars, so the inner voices don’t get left in the lurch for a bar of anticipatory time-keeping. Something strange has happened, though: however evenly numbered, the violin entrance (this time with (a) material) feels peremptory rather than correct – as though the elements meet squarely by accident rather than by agreement. (A comparison of the beginning of K. 515 to the opening scene of The Marriage of Figaro, in which Figaro sings the measures of his bed-to-be – ‘cinque ; dieci’, coincidentally – and his bride-to-be Susannah sings praises of her own hat, could be carried for quite a nice distance.)

The C Major Quintet was written in 1787, together with another viola quintet in G minor, K. 516. Both pieces, which in some ways form a matched pair, are absurdly fine. Mozart wrote quite a few great string quartets – but the quintets, and especially these two, which come shortly before Don Giovanni, are great beyond any explaining. They are replete with complexities and clear as water. Instrumentalists remain grateful for the opportunity they give: to look closely at large-scale works of Mozart in the dense intimacy of an ensemble of five.

The exercises on the Violin Fundamentals page are to be used with a timer, for about 60 seconds of simple physical focus.